Welcome to Presto Manifesto!, a clicker-strategy game based on policy and the relationship between governance, economy and climate change.

This project was created as part of my Master's Project at Georgia Tech. Presto Manifesto utilises the concept of a Hidden Player to react to the player's decisions and to determine victory and loss. This concept is loosely inspired by the Director AI systems used in games like Left 4 Dead.

This Hidden Player is effectively a NPC that keeps track of various intrinsic factors such as satisfaction, discontent, and non-renewable resource-harvesting limits and provides feedback to the player in the form of Victory or various forms of Defeat. It is a combined abstraction of the civilization and the city that the player, in their capacity as the government, manages.

Presto Manifesto, albeit not a RTS in itself, utilises several concepts used in RTS games, like tech-trees, resource-harvesting and base-building, to convey environmentalist messages on sustainability and collective planning as a potential solution to the climate crisis.

Click on button nodes to implement research and build facilities. There are multiple defeat states, but only one victory state.

Click on the facilities/research on the top right to move between research and facilities.

There are two types of button nodes- research nodes and facility nodes. These nodes are viewable on the research tree and the facility tree respectively.

Each node requires some resources. There are three resources- conventional energy, wealth and novel energy. The resource requirements for each node are given below them.

The + above each node indicates how resource gathering rate is affected by the button.

Click and drag the Screen to move around, as some nodes may be off-screen.

Scroll inwards and outwards to zoom.

A game by Anuraj Bhatnagar

Download and decompress the archive, and run "PrestoManifesto.exe" to play the game. 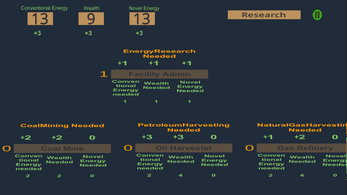 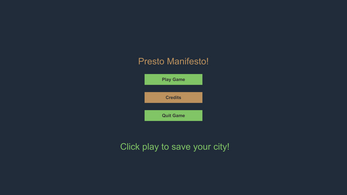 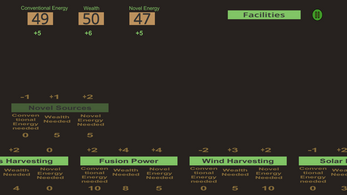 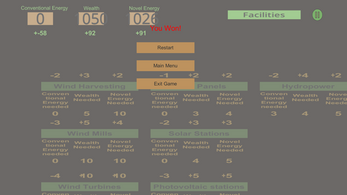 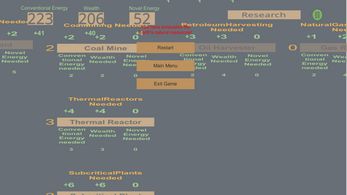